Even though bunions are a common foot deformity, there are misconceptions about them. Many people may unnecessarily suffer the pain of bunions for years before seeking treatment.

What is a Bunion?

A bunion (also referred to as hallux valgus or hallux abducto valgus) is often described as a bump on the side of the big toe. But a bunion is more than that. The visible bump actually reflects changes in the bony framework of the front part of the foot. The big toe leans toward the second toe, rather than pointing straight ahead. This throws the bones out of alignment – producing the bunion’s “bump.”

Bunions are a progressive disorder. They begin with a leaning of the big toe, gradually changing the angle of the bones over the years and slowly producing the characteristic bump, which becomes increasingly prominent. Symptoms usually appear at later stages, although some people never have symptoms.

Bunions are most often caused by an inherited faulty mechanical structure of the foot. It is not the bunion itself that is inherited, but certain foot types that make a person prone to developing a bunion.

Although wearing shoes that crowd the toes won’t actually cause bunions, it sometimes makes the deformity get progressively worse. Symptoms may therefore appear sooner.

Symptoms, which occur at the site of the bunion, may include:

Symptoms occur most often when wearing shoes that crowd the toes, such as shoes which are narrow or pointed at the front or high heels. This may explain why women are more likely to have symptoms than men. In addition, spending long periods of time on your feet can aggravate the symptoms of bunions.

If you suspect you have a Bunion you should make an appointment to see one of our podiatrists here in the clinic. Because bunions are progressive, they don’t go away, and will usually get worse over time. But not all cases are alike – some bunions progress more rapidly than others. Once we have evaluated your bunion, a treatment plan can be developed that is suited to your needs.

It is important that a podiatrist looks at your bunion sooner rather than later to evaluate what is needed, in some cases we can advise simple interventions which are aimed at easing the pain of the bunions but they won’t reverse the deformity itself. These include:

Wearing the right kind of shoes is very important. Choose shoes that have are wider and do not pinch at the front and forgo those with pointed toes or high heels, which may aggravate the condition. We can advise you on the correct footwear for your condition and we also have a range of shoes in stock that may suit your condition.

We can add padding over the bunion to help minimize the pain.

Avoid activity that causes bunion pain, including standing for long periods of time.

Oral nonsteroidal anti-inflammatory drugs (NSAIDs), such as ibuprofen, may be recommended to reduce pain and inflammation.

Although rarely used in bunion treatment, injections of corticosteroids may be useful in treating the inflamed bursa (fluid-filled sac located around a joint) sometimes seen with bunions.

In some cases, custom orthotic devices are what is needed to ease the discomfort and we can supply you with those.

At Dalkey Podiatry Clinic we provide a treatment plan that involves exercise and orthotic intervention. 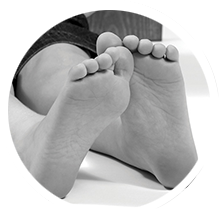 Does your child have flat feet?

Many children present with flat feet or walk with an in-toeing gait. Some children who present with Dyspraxia and Hypermobility Syndrome require assistance with... READ MORE HERE 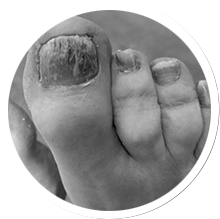 Do you have a toenail condition?

Does the colour and shape of your toenails concern you? Have you thick brittle toenails, are they ingrowing, are they discoloured? A Podiatrist can treat and advise you on the best course of action... READ MORE HERE 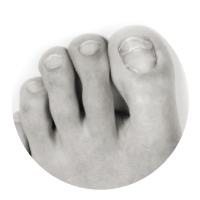 Athlete’s foot and fungal nail conditions are persistent common foot complaints. Podiatrists can assist you with treating and advising you on long term solutions for these problems... READ MORE HERE